Rhett A. Butler founded Mongabay.com in 1999 out of his passion for tropical forests. He called the site Mongabay after an island in Madagascar.

Since then, Mongabay has grown into the world’s most popular rainforest information site and a well-known source of environmental news reporting and analysis. Today, Mongabay draws more than 6 million visitors per month and publishes stories in nearly a dozen languages. It is commonly used as an information source by mainstream media, including The Economist, Bloomberg, National Geographic, and the Associated Press. Mongabay is also widely recognized as an accurate and trust-worthy source by civil society organizations as well as development agencies.

Over the years Mongabay’s impact has been substantial. Articles on the site have sparked protests in Madagascar against a French shipping company transporting timber logged illegally from rainforest reserves and helped block destructive projects like a plan to log 70 percent of Woodlark Island off New Guinea for a giant oil palm plantation. Mongabay stories have influenced investment flows, including a decision to spare Cameroon’s rainforests from logging in order to win payments from the carbon market. Stories and photos have even inspired art.

In 2012 Mongabay.org was formed to facilitate the development of new education and journalism initiatives and leverage its existing network, traffic, and reputation. Mongabay.org aims to raise awareness about social and environmental issues relating to forests and other ecosystems.

Mongabay’s mission is to raise awareness about social and environmental issues relating to tropical forests and other ecosystems, to wildlife, and to the important role that natural ecosystems play in maintaining critical services, including stabilizing the global climate system.

Mongabay is an online-only organization with virtual operations spanning borders so we do not have a main office or headquarters. We are legally registered in California and our mailing address is:

Information on Mongabay.org’s status, filings, and financials is available upon request. 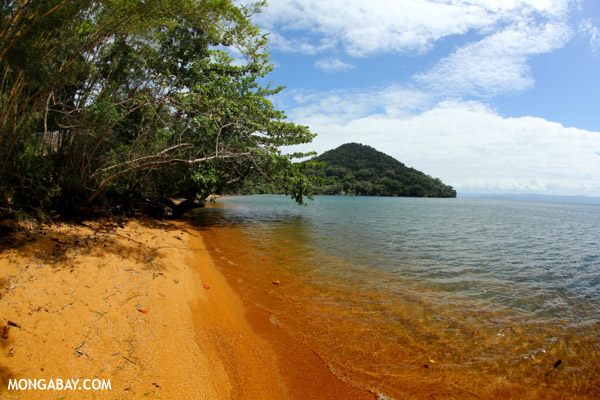 A beach on Nosy Mangabe – Mongabay’s name sake in Madagascar.